Getting fit for the digital future – that is the goal of the “Bildungspartner­schaften digital” competition. Here, schools enter into cooperative ventures with companies to use the potential of digitization for career guidance. The Ernst Reuter School (ERS) in Karlsruhe choose imsimity and has now received an award for its joint project idea. 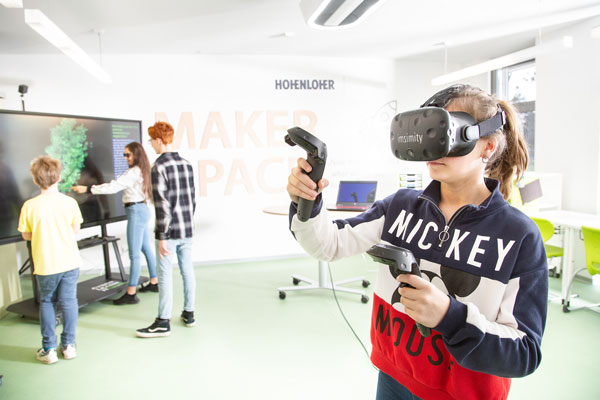 The competition, which is open to all secondary schools in Baden-Wuerttemberg, rewards plausibly planned projects that can be implemented in the long term, which address digitization and serve as professional orientation. The IT company imsimity located in St. Georgen in the Black Forest has therefore worked with the ERS to convert the previously analog “Red Salon” format to digital.

Micha Pallesche, principal of ERS, explains: “The Red Salon is a place where students, teachers, parents and people from the neighbourhood come together and think about how they want to positively shape and develop their school. School should thus become even better and take into account as many student-teacher-parent ideas as possible. Participation and involvement of all stakeholders are at the forefront.”

Some of these people, who are directly and indirectly affected by the school’s activities, put their creative heads together in an online meeting in November 2020. The goal was to discuss future-oriented, digital possibilities with the virtual reality (VR) experts from imsimity. Because everyone thought it was a shame that Corona had not allowed a “normal” red salon in person for almost a year.

At the meeting after the Design Thinking method, two professors from the field of media didactics were present as guests in addition to the two school principals. At the end of the dynamic online meeting, it was clear to everyone that a new, futuristic creative space should be developed for the school – a supplement to the analog red salon in the digital parallel world.

Shaping progress together – even at a distance

Since its founding, the imsimity team has contributed to the digitalization of educational processes in general and vocational schools with a variety of initiatives. With the development of the VR learning environment CyberClassroom, for example, it was possible for the first time worldwide to convey complex knowledge stereoscopically and interactively. Every year, school unis and VR learning courses are organized with educational sponsors to make the new learning technology known and tangible.

A further step in the development of VR learning applications for schools has now been taken with the awarding of the “Digital Red Salon” project. Starting in March, the idea will turn into virtual reality. A kind of coworking space is to be created. Here, visitors dovetail reality with the virtual world and can generate new ideas for shaping their school in a similar way to a serious game. In this way, they can initiate fundamental changes in the digital organization and culture at the school.

The greatest added value for the participants in the education partnership is the development and expansion of future competencies. Above all, this includes the ability to make proper use of media and their content in accordance with their own goals and needs, and to be able to derive visions from them for the future of the community. The VR application ensures interaction among visitors in virtual space by tracking them. The use of VR glasses, such as the Pico or the Quest, enables individual immersion in the digital creative world with a very high degree of immersion. Fun in digital collaboration is the main focus. The challenge will be to be able to make these VR glasses available to participants. But these glasses are now cheaper than a smartphone or tablet and will probably be part of every media development plan in the future.

More information about the possibilities of VR in the classroom is available on our CyberClassroom product page. zu finden.